Telugu Dubbed Tamil Movies 2021 (A to Z Telugu Dubbed Movies): Our Telugu audience is always willing to support films in other languages. The majority of Telugu speakers enjoy watching Tamil to Telugu dubbed films. The Telugu audience is not unfamiliar with dubbing films. We have seen numerous Telugu dubbed films with performers such as Rajinikanth, Kamal Hassan, Bhagyaraj, and others during the previous few decades. 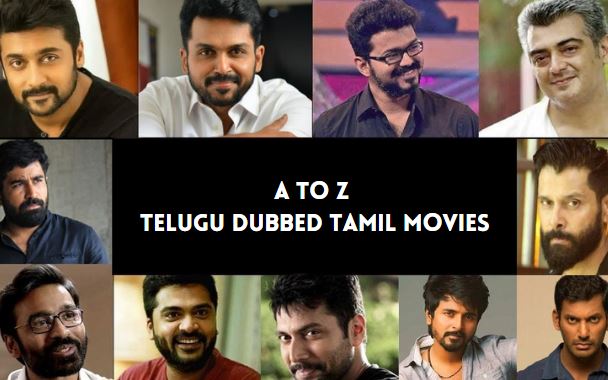 To satisfy the budget, the film market has been expanded to other states and all of India. Suriya, Karthi, Vikram, Vishal, Vijay Antony, Dhanush, and Vijay are more popular in Telugu states than Tamil actors. Their films’ FDFS openings are on a par with that of a typical Telugu hero picture. On this page, we’ll provide you with a list of the best Telugu Dubbed Tamil Movies, as well as a cast and director list for all popular Tamil actors and directors.

Kollywood is a film industry that is primarily focused on delivering films with great content, regardless of genre. This is the primary reason why Telugu audiences seek for Telugu dubbed Tamil films from A to Z in order to enjoy the concept-driven flicks and drama contained in these films. Additionally, filmmakers are choosing stories that have a broader appeal beyond South India in order to overcome India’s language constraints.

Tamil cinema has a wider appeal in South India. Rajini, Kamal, Vijay, Ajith, Shanush, Suriya, and Vikram are all well-known in India. These actors’ Telugu-dubbed Tamil films such as Ghajini, Aparichitudu, Bichagadu, Yuganiki Okkadu, and Raghuvaran B.Tech have been tremendous hits in this region, establishing a lucrative market for a number of Tamil Super Stars.

Since the release of Bahubali, South Indian actors have become more picky in selecting screenplays for multilingual and bilingual projects. However, some of the earlier movies of Tamil Cinema were lately dubbed into Telugu and getting much appreciation in Telugu now. This website will inform you of the best Telugu-dubbed Tamil films released between 2020 and 2021. Therefore, why are you delaying? Please have a look at the following list that will brighten your day.

Apart from famous names such as Suriya, Karthi, Vikram, Dhanush, Ajith, and Vijay Antony, numerous low-budget Kollywood films have performed well in Telugu. This section contains Telugu dub movies that you may watch online for free.

Dhoolpet is a Telugu-language remake of the Tamil cult film “Pudhupettai (2006)”. Though the film was originally released in Tamil in 2006, it was dubbed into Telugu in 2020. This film established Dhanush as an actor and his brother Selvaraghavan as one of India’s top filmmakers. This film is accessible for free on YouTube in Telugu.

Nagaram is a Telugu-language remake of the Tamil cult film “Maanagaram (2017)”. It is the top Telugu Thriller movies that are available for free online. Sundeep Kishan, Sri, Charle, Madhusudhan Rao, Ramdoss, and Regina Cassandra feature in this film directed by Lokesh Kanagaraj. Additionally, view the complete list of Lokesh Kanagaraj Telugu films.

Pisachi is a Telugu-language remake of the Tamil cult film “Pisasu (2014)”. Tamil film director Mysskin is one of the most successful filmmakers in Kollywood, with all of his films performing well at the box office. Pisaasu is one of his best films, created on a shoestring budget and with fresh cast members. After a few months in Tamil, the film is released in Telugu.

Sneham is a Telugu-language remake of the Tamil cult film “Anjathe (2008)”. Anjathe is another film by Mysskin that is available in Telugu as Sneham. This film established Mysskin as a remarkable filmmaker and helped him achieve commercial success. Though the film was originally released in 2008, it was recently dubbed into Telugu and made available for free online in 2020. Additionally, view the complete list of Mysskin Telugu films..

Metro is a crime thriller film directed by Ananda Krishnan and stars Bobby Simha, Shirish Saravanan, Sendrayan, Sathya, and Nishanth. In 2017, the film was dubbed and released in Telugu with the same title.

Cast: Shirish, Bobby Simha, Sendrayan, Nishanth and among Others

Crime 23 is a Telugu dub of the 2017 Tamil cult film “Kuttram 23”. Kuttram 23 is Arun Vijay’s comeback film after a string of disappointing films; the film was a commercial triumph in Kollywood and cemented his place as a Hero. The film is accessible for free on YouTube in Telugu as Crime 23.

Nakili is Vijay Antony’s first Telugu film, and it was a silent hit, receiving positive reviews following his second blockbuster Bichagadu. The film maintains a compelling tension throughout, and director Jeeva Shankar’s direction is captivating.

If you wish to watch Thegidi (2014) in Telugu, you should not miss Bhadram’s Telugu dub. The film is presently available for free online on YouTube.